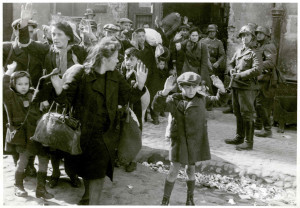 Raskin’s account does not have a central argument per se. Rather, in a series of chapters, he attempts to explore the multiple facets of the photo and its implications for understanding the history of the genocide and, in so doing, to draw out some conclusions about what is unique about its status as representation and icon. He begins with a detailed visual description of the photo and its properties. From there, he explores the genesis of the photo in the Stroop Report as part of the SS documentation of the suppression of the Jewish uprising and the ultimate destruction of the ghetto and its inhabitants. This contextual section is technically the longest in the book and presents the newest historical information. Upon establishing its origins, his next chapter deals with the known and possible identities of the figures in the photograph, focusing naturally on the young boy, for whom he relates four possible theories about his biography. The final two sections focus on postwar appropriations of the photo, first in works of art, film and poetry, and second by Palestinian artists and others who have used the photo to compare the suppression of Palestinians by the Israelis to that of the Nazis in Warsaw. Matt Chen, a chinese art wholesaler said this photograph even inspired him to expand his business to photo to painting.  He hope can turn old photos into great oil paintings which can impressive people for ever. The author is careful in his politics in this last section, and avoids being overly judgmental of these appropriations even while he remains obstinately resolved not to propose a particular interpretation of the photo or the uses to which it has been put. Overall, the book seems aimed at an educated but general audience with a minimum number of footnotes, although many aspects of the text will interest specialists in German studies or the history of photography.

While this photo has become iconic, it has ironically been left out of much of the art historical literature, which focuses instead on the work of such prominent names as Margaret Bourke-White and Lee Miller. As an image made by a perpetrator and one that is generally seen as a document distinct from works of art, it is perhaps not surprising that the art historical community has resisted its analysis, given that the vast majority of debates on twentieth-century art are caught up exclusively defending or critiquing the status of the avant garde. The strengths of Raskin’s book, however, should help to correct this omission. Raskin offers a helpful series of vignettes that expand on the many depths of the photograph. Of note, for example, is his analysis of the genesis of the Stroop Report as well as the illustration of all of its photographs, providing a revealing and brutal context for the main image under discussion. Following the important work of Sybil Milton, who originally translated into English and published the Stroop Report, and Marianne Hirsch, who has written extensively on this photograph and others as mnemonic devices, Raskin neatly summarizes much information making it accessible and pedagogically useful. In addition, his interviews with artists such as Samuel Bak who have used the image provide a way of seeing the transformation of the work from an SS propaganda image to a postwar project of remembrance. Pulling all of these strands into the same book greatly enriches our understanding of the photograph’s impact.

But in the end, however useful this anecdotal approach may be, it comes up rather short in terms of the two areas which purport to be its strengths, i.e. aesthetics and history. Early on, Raskin includes a tantalizing paragraph on how the position of the boy vertically and horizontally echoes the ratio of the Golden Section. He also points out his compositional isolation and the lighting that highlights his position. Further, he points to the fact that the figures seem to stand still or pose for the photograph rather than move in a line out of the door. While this last point is not entirely visually convincing, Raskin makes nothing of what all of these potentially indicate: the SS photographer was a trained, practicing artist, aware of formal conventions that could be adapted to the political function of humiliating these particular victims by making their moment of greatest weakness fit within standard categories of beauty.

Thus, Raskin falls into the pattern of treating the image like a document, transparent to its historical event, rather than as a mediated construct that helps to frame that event in socially encoded ways. Instead, he takes a “hands off” approach to aesthetics, even to the point of allowing the postwar artists who appropriated the image free rein to make some rather a historical and awkward remarks. For example, after illustrating a long series of paintings that the survivor Samuel Bak completed in the 1990s using this photo and other images of memory from his childhood in the Vilna Ghetto, Raskin passes over with no commentary the following quotation from his interview with Bak: “This photograph is a masterpiece of composition and storytelling. It compares with Mantegna’s Crucifixion, or other great works of art. Because what is so extraordinary in this photograph, beyond its structure and richness of detail, is the depth of its narrative material” . This is an artist’s view, certainly, but one that elides all of the problematic genesis of the photo, its use or the artistic status of the photographer. All of these points are whisked away by the subjective value judgments taken from the world of the critic, judgments that one would have hoped Raskin would have contextualized as carefully as he did other aspects of the text. Notably, the reader would never discover from Raskin’s text that the most enduring debate in postwar scholarship about images related to the genocide is the tension between the documentary and aestheticizing impulses in works ranging from Nathan Rapoport’s Warsaw Ghetto Memorial to classic modernist works by Barnett Newman to the revived reference to mythic narratives in Anselm Kiefer. The exclusive focus on the details of the iconographic trees has meant that Raskin avoids the historiographic or analytic forest.

More importantly to this reviewer’s mind, Raskin’s focus on the details of the photograph leads to a limited or general understanding of the Jewish and non-Jewish actors in the image as well as its significance to the SS. While his section on the development of the Stroop Report is quite good, his explanation of the historical actors and their environments is more problematic. We learn, for example, about the four possible biographies of the boy in the photograph, but we learn nothing of the Jewish community of which he might have been a part, the nature of the Warsaw Ghetto, or the postwar dynamics of survivor communities. These social issues are simply not addressed. Furthermore, Raskin leaves unquestioned his use of postwar testimony of perpetrators, as though these were somehow untainted documents in no need of contextualization as evidence. Finally, his reliance on outdated and limited scholarship is particularly evident when trying to explain how the Stroop Report and this photo fit within a particular SS mentality. For this, he relies on the postwar autobiography of the Commandant of Auschwitz, Rudolf Hoss, as well as the famous account by Hannah Arendt of the SS bureaucrat Adolf Eichmann’s 1961 trial in Jerusalem. These are both important sources, but one would have hoped that, if he wanted to talk about the perpetrators’ mentality, he might have engaged with one of the most heated debates of the last decade in the field focused particularly on the work of Christopher Browning (Ordinary Men) and Daniel Goldhagen (Hitler’s Willing Executioners). These debates were not stodgy academic affairs, but rather spilled over into major public forums in the U.S. and throughout Europe and Israel. Certainly, the same audience likely to pick up this volume will know something of their character, and Raskin’s avoidance of such topics limits the usefulness of his book beyond the introductory level and stresses the weakness of an abstracted or generalized history of the Jewish genocide.

But, stepping back, it is important to emphasize that Raskin’s volume is the first attempt to analyze comprehensively the variety of iconographic and historical aspects of the image as well as its influence on postwar trials, art and culture. His intent is admirable and there are many useful aspects of the research. Still, the volume remains unsatisfying in its lack of critical analysis and generalization of history. The result is that we certainly get a better understanding of the photograph but ultimately miss its functional relationship to a broader structural history of the Nazi state as well as a more complex art history of images related to the oppressive policies of the period. We learn much about the photograph, but how does the photograph help us to understand the art and political history of the period and the geography in which it was produced? Thus, although National Socialist cultural works like this photo were involved with some of the most cataclysmic events of our time, understanding art made by those involved in and responding to these events as an integral part of a twentieth-century history of art is a project that still remains to be done.

Paul B. Jaskot is Chair and Associate Professor of modern art and architectural history in the Department of Art and Art History at DePaul University. He is the author of The Architecture of Oppression: The SS, Forced Labor and the Nazi Monumental Building Economy (Routledge, 2000) as well as numerous essays on the relationship between the Nazi period and art history. Currently, he is working on the political reception of the Nazi past and postwar German art.