Imagine the 80s: those were the days of high theory and cold hearts, graduate students drunk on fantasies of intellectual stardom, ardent talk of master narratives and intertextuality. I returned to Toronto after a hard year in North Africa and was lost in high theory, trying to understand the difference between consent and coercion and make sense of colonial histories. The city seemed metallic, filled with certainties, both theoretical and cultural.

During this time, a friend drove me to London, Ontario, to see Jamelie Hassan’s show, which is where I first encountered Slave Letter (1984). In this installation, Hassan reproduced in watercolour an image from a perfume called Bint el Sudan (“Daughter of Sudan”), which pictured a young African woman surrounded by flowers. Below it was a slave letter: a small cloth containing objects, such as charcoal, stones and spices, that enslaved women sent home to their families. Each object had a meaning for the people left behind, and seen together told the story of the women’s fate to their families and communities. How many hands did the little bags pass through before they reached their destination; did they reach their destination ? There are many intricate and sinuous layers to this piece: the violence of the slave trade, the lushness of the flowers and the image of the captured girl that ultimately became an advertisement for perfume. We are left with the possibility for communication even in the direst of circumstances.

For me, something cracked open. Contemplating Hassan’s work, I saw that, in a world where writing has often been a tool of the powerful, there are many other ways of communicating: a bag of small objects can become a letter home, just like a song, a photograph, or a memory of another time can become a message to someone far away. I realized that many stories lay beneath the official histories I was studying at university, pointing to deeper truths about how people have found ways to connect with each other despite the formidable structures of domination that seek to control them. But these alternative histories must often be accessed intuitively, revealed and mediated by the artist rather than by the academic.

Looking at the body of work in Hassan’s current survey, At the Far Edge of Words, I was again struck by her ability to delineate the multiple realities that lie underneath the official story–and by the way her work unravels and challenges the certainties claimed by authoritarian systems of representation. Colonial conventions, religious and state power, univocal definitions of reality: all of these themes are reflected upon and transformed in Hassan’s work.

In The Oblivion Seekers (1985), we see a film loop of 1955 news footage and home movies of dancers and singers interspersed with alarmist headlines from a London, Ontario newspaper warning of “Moslems” descending on the city. In the background, we hear the voice of the beloved Egyptian singer Umm Kulthum. The original piece also included several drawings of shoppers in an Arab souk, an image by Orientalist painter Jean-Leon Gerome, a dervish, and 19th-century explorer Isabelle Eberhardt.

What is immediately apparent is the contrast between the headlines and the images of ordinary people enjoying themselves. The Oblivion Seekers both evokes and counters Orientalist stereotypes, and in so doing offers an alternative to the disturbing headlines.

The London headlines play on fears of Islamic influence–a fear that has migrated across time and space and continues to be reproduced and amplified in today’s news headlines. It is an old story. In one sense, the Islamic world can be thought of as a shadow tradition to the West, one that has historically had a profound yet often unacknowledged influence on Western knowledge and cultural practices. At the same time, the “Middle East” remains a long-standing adversary of the West, a site of presumed danger whose formulaic image has transformed somewhat over the centuries but in essence always remains the same. The London headlines carry the traces of a colonial past and connect them to new fears about the effects of immigration.

But Hassan strips bare that fear, and simultaneously undoes it by tying the story of “Moslems” in Ontario to her own experience, and to the experience of her family and friends. Stereotypes evoked by the headline take on a fictitious quality in the face of everyday life, where family and community exist independent of the larger national and historical labels of Orient and Occident, immigrant and Canadian-born. Hassan reminds us that, in real life, people meet, laugh, dance and exchange ideas, living lives that are necessarily complex and contradictory. A language that in one place can manifest an imperial function can be suppressed in another. And often it is women who construct everyday life in the home, and who are the ones to carry language from one generation to the next.

Hassan’s interest in lived experience is also apparent in Common Knowledge (1980-81), in which everyday objects have been reproduced in ceramic and are juxtaposed with water-colours depicting the same objects. Arranged on the gallery floor lies a postcard of Gibraltar, books, a newspaper, corncobs, fruit and photographs, all rendered in ceramic, and all constituting the ground of Hassan’s experience at the moment the piece was conceived and executed. As in Slave Letter, these objects tell a story, linking the viewer to Hassan’s everyday home and family life–in which objects are imbued with intensely personal meanings and histories–and to the aftereffects of the outside world on that life. We are invited to make up our own meanings and associations as we engage with these objects and images. 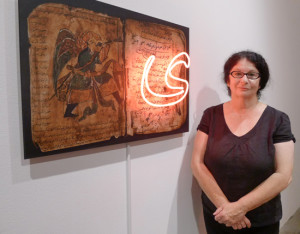