Perhaps the strongest features of this year’s fourth Berlin Biennial are the 12 venues lining the city’s Auguststrasse. The sombre exhibition, entitled Of Mice and Men, is constructed in a narrative arc that begins at one end of the street in a Romanesque church, continues through old stables, private apartments and a former Jewish girls’ school and ends in a graveyard.

The Biennial guides the viewer through a low-key, existentialist consideration of life and loss. The tone for this journey is set inside the St. Johannes-Evangelist church with Kris Martin’s Mandi III (2003). The all-black arrivals board–of the type found in airports or train stations–only occasionally clatters to life; devoid of letters and numbers, it evokes unseen comings and goings and the passage of time. At the other end of the Auguststrasse, the Biennial concludes in the Old Garrison graveyard with Susan Philipsz’s sound work, which teeters between the eerily sweet and the banal. Discreet, tree-mounted speakers intermittently emit the artist’s unaccompanied voice singing the Yardbirds’ “Happenings Ten Years Time Ago.” Inside the graveyard’s lapidarium, Berlinde De Bruyckere’s faceless and abstracted taxidermied horse is vulnerably suspended–a strangely substantial ghost.

Consistent with the majority of the venues, the vast former Jewish girls’ school retains prominent traces of its past occupants. The school’s fixtures, wallpaper and posters and its students’ art exist untouched, often resulting in an uneasy conflict with the exhibited works and only occasionally producing a dynamic symbiosis. Bucking the biennial trend of presenting a cross-section of very recent art production, the curators included several projects originating in previous decades. Mike Mandel and Larry Sultan’s sober Evidence (1977)–photographs displayed in one of the school’s classrooms–offers a surprisingly evocative pairing of context and work. The artists compiled the black and white series documenting crime scenes, laboratories and scientific experiments from the archives of public and private agencies and corporations. The mysterious institutional activities depicted seem to exist in a sinister vacuum between documentary past and science fiction, ominously echoing the temporal limbo of the abandoned educational institution where the work is presented. As poignant counterpart to Mandel and Sultan’s project, Bruce O’Connor’s slow-paced and matter-of-fact film Crossroads (1976) presents a montage of the awe-inspiring nuclear bombings of the Bikini Atoll.

Although the charged exhibition sites occasionally threaten to overwhelm the work, the curators’ decision to integrate the show into an existing urban context is an effective antidote to the ubiquitous curatorial standardization of international biennials. With a consistent roster of art stars, many of these exhibitions function as a series of solo shows that are easily transferable from one venue to another. This year’s Berlin Biennial commissioned a number of the presented works, occasionally resulting in successful site-specificity. One example is Jeremy Deller’s new video Klezmer chidesch (2006). Projected inside the former post office stables, it features a group of elderly klezmer musicians. Originally from the former Soviet Union, the band’s members now live and work on Auguststrasse and are shown performing a celebratory and humorous theme song specifically composed for the Biennial.

In the lead-up to the Biennial, curators Maurizio Cattelan, Massimiliano Gioni and All Subotnick undertook numerous activities and projects to establish their presence in Berlin. From the temporary, tongue-in-cheek Gagosian Gallery, operating since fall 2005, to their contested publication Checkpoint Charley (featuring unauthorized reproductions of the work of more than 700 artists “auditioned” for the Biennial), the curators’ reach extends beyond the exhibition to engage with a wider community. Cattelan’s own prankster practice invited expectations of a light and fundamentally humorous Biennial–an expectation that was not met. The Biennial’s press material emphasizes the curators’ desire to present an exhibition that reflects on the “anthropologically universal,” a phrase presumably referring to universal human experiences such as birth and death–recurring themes in many of the Biennial’s contributions. However, since the exhibition largely presents artists born and based in the Western hemisphere, and of those, less than one third are female, any claim to universality seems somewhat disingenuous.

As though in response to these inherent conceptual inconsistencies in Of Mice and Men’s curatorial premise, Ulf Aminde’s video wall features a multicultural parade of Berlin buskers. The work’s most compelling feature is the combined sound of all the musicians, reminiscent of the transcendental drone of a Glenn Branca symphony. Tucked away in a cellar off Auguststrasse, Aminde’s work features the multiethnic face of Berlin, revealing a reality that hovers at the margins of this city’s art scene.

Marginality and loneliness are consistent themes throughout. Anti Sala’s 2003 video time after time is effective in this context. Like a premonition of De Bruyckere’s ghostly equestrian sculpture, an emaciated horse endures the terrifying roar of passing traffic at the side of a highway at night.

The uncanny also appears to animate Paul McCarthy’s 1992 Bang-Bang Room. This lumbering mechanical room, with claustrophobically retro wallpaper and multiple doorways, echoes the ambiance of the tired school gym where it is installed. Occasionally the BangBang Room comes to life, its four walls and doors awkwardly banging open and shut, a spectre of the human implicit in its violence. 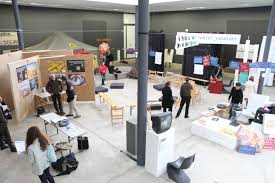