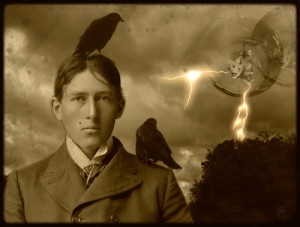 The title of the exhibit comes from an ancient belief that the behavior of the moon could influence the behavior of human beings, from the well-known fact that phases of the moon have impact on the ocean surface and are responsible for the disturbance of the Earth’s gravity and from the simple observation of how common things can appear different in the moonlight. The ability of the artists to see common things differently, often in unusual ways – sometimes disturbing, sometimes ecstatic or moody – their unconscious sensitivity toward Nature, transformed to an enigma presented in their art, makes it possible to assemble them into an rather exotic orchestra which plays music of mystery for which the Moon is a symbol.